We hope you will take time to read our previous news letters about DVT and prevention – —A DVT Can Strike Young and old Alike and Federal Awareness Campaign.  Vanda

A new study has opened to patient enrollment which may define the future treatment of Deep Vein Thrombosis (DVT). 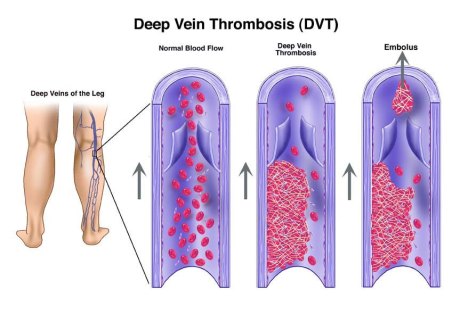 25 – 50% of DVT patients develop Post-thrombotic Syndrome (PTS). PTS is a long term condition with daily pain, fatigue and swelling of the leg. It is aggravated by standing or walking and rest must be included in a daily routine. DVT may even result in an inability to walk or hold a job. This undeniably decreases the quality of life.

Preliminary testing indicates that patients who have blood clots removed using new blood clot busting techniques are less likely to develop PTS. However since these treatments are more invasive and costly upfront, physicians do not agree when is the best time to use them. Since 1960 doctors have focused on preventing pulmonary embolisms by using anticoagulants. The long term affects of DVT such as PTS have not been addressed.  Yet it has a very harmful affect on the patient’s quality of life.

If the new trial is positive, the treatment of DVT will shift to reduce the log term disabilities associated with DVT such as PTS. This trial is endorsed by Society of Interventional Radiology, American Venous Forum and American College of Phlebology.

A DVT is formed in a deep vein of the leg when normal blood flow is impeded. If a portion of the clot breaks off, it becomes a life threatening embolism which is currently treated with anti-coagulants. Proposed technology will insert a catheter into the blood clot, block it off and insert clot busting medication to dissolve the blood clot under imaging guidance. The catheter also chews up the clot to allow the clot busting medication to do its job.

Remember a DVT as well as PTS may be avoided by wearing compression stockings and socks and getting exercise.